Warning: "continue" targeting switch is equivalent to "break". Did you mean to use "continue 2"? in /homepages/6/d602103611/htdocs/clickandbuilds/CosmicSociety/wp-content/plugins/siteorigin-panels/inc/styles-admin.php on line 390
 A House in Troy, NY - Cosmic Society of Paranormal Investigation
Skip to content

It started with an argument over loud music between neighbors; “Cindy” lived on the first floor and complained to the ‘gothic-looking’ handsome two men who lived above her. Not long after, her cat died mysteriously and the two second floor men were evicted for reasons unknown.

On the day they moved, Cindy found an array of unusual items and animal parts hung on the outside of her entrance doorway. Shrugging it off, Cindy spent a few weeks uneventful. 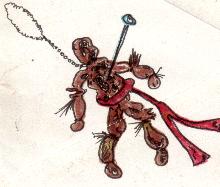 Little by little however the atmosphere and feeling of the house began to change and unexplained noises, scratchings and knockings caught Cindy’s attention and she started feeling anxious about it.

Winter came and by this time Cindy was finding piles of dead flys in the house and in dresser drawers which would disappear as she tried to show them to friends and relatives. Bad luck quickly ensued and Linda was almost drawn back to alcoholism.

Eventually the Shaman and his wife Raz were called into the house to clear it of the negativity that had infested the dwelling. During the final session/ceremony, the shaman was thrown to the ground. He felt as if “the rug had been pulled out from under him” and something holding his legs. A photo taken at the time shows white energy swirling around his leg, while he is laying on the floor. Other photos show distortion and red and yellow energy. The negatives have been reviewed and light leaks are not evident.

It took about six months, but they accomplished the clearing and all was well with Cindy. (She is still fine to this day as far as Raz and the Shaman know). The only problem was that the “energy” did not leave the Shaman that night.

The Shaman became increasingly agitated after arriving home. (The Shaman is a strictly non-violent person). He started speaking with clenched teeth, laughing very strangely and became increasingly mad at Raz. He remembers thinking “It’s her fault! She’s the one who brought me to that place!” (meaning Linda’s apt.) But at the same time he realized that this wasn’t himself doing these things (by now Raz had locked him in the bedroom from the outside and he was doing “a scene like Jack Nicholson from The Shining.”) “He was banging on the door and saying in a voice not his own, ‘Let me OUT, Razzzzzzzzzzz’, LET ME OUT!”

Lynda Price was a healer who dealt in exorcisms from Amsterdam, NY. She shook her head yes as she agreed with Raz to leave immediately and head for their house in Watervliet.

The photos below show a progression of the energy (believed to be demonic) leaving the Shaman’s body near his legs. “This is the one case” he tells me, “that I was actually taken over by the spirit. It was fortunate that Lynda, being as experienced as she was, (she has since passed away), was able to get to me so quickly, within hours.”

I asked him what he felt, if anything, as Lynda preformed the clearing. “Like a huge pressure was lifted off my chest, as if it were rolled right off.” He also noted that his eyes and other senses seemed “back to normal function and focus.”