Warning: "continue" targeting switch is equivalent to "break". Did you mean to use "continue 2"? in /homepages/6/d602103611/htdocs/clickandbuilds/CosmicSociety/wp-content/plugins/siteorigin-panels/inc/styles-admin.php on line 390
 Calendar Chronicles the Paranormal - Cosmic Society of Paranormal Investigation
Skip to content 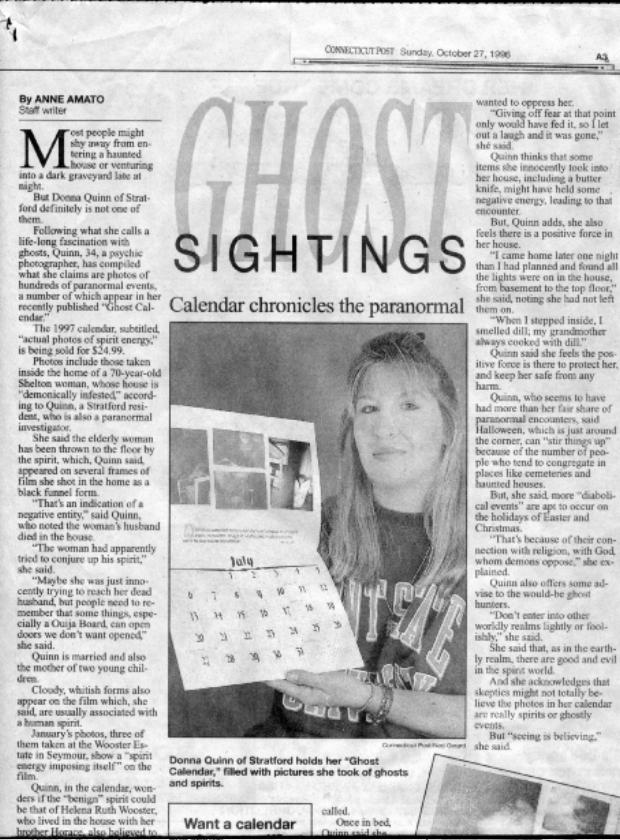 Most people might shy away from entering a haunted house or venturing into a dark graveyard late at night.

But Donna Kent of Stratford definitely is not one of them.

Following what she calls a life-long fascination with ghosts, Kent, 34, a psychic photographer, has compiled what she claims are photos of hundreds of paranormal events, a number of which appear in her recently published “Ghost Calendar.”

Photos include those taken inside the home of a 70-year-old Shelton woman, whose house is “demonically infested,” according to Kent, a Stratford resident, who is also a paranormal investigator.

She said the elderly woman ~ has been thrown to the floor by . the spirit, which, Kent said, appeared on several frames of film she shot in the home as a black funnel form.

“That’s an indication of a negative entity,” said Kent, who noted the woman’s husband died in the house.

“The woman had apparently tried to conjure up his spirit,” she said.

“Maybe she was just innocently trying to reach her dead husband, but people need to remember that some things, especially a Ouija Board, can open doors we don’t want opened,” she said.

Kent is married and also the mother of two young children.

Cloudy, whitish forms also appear on the film which, she said, are usually associated with a human spirit.

January’s photos, three of them taken at the Wooster Estate in Seymour, show a “spirit energy imposing itself” on the film.

Kent, in the calendar, wonders if the “benign” spirit could be that of Helena Ruth Wooster, who lived in the house with her brother Horace, also believed to haunt the old homestead.

The building is now known as the Carousel Gardens restaurant.

“I was having dinner at the restaurant with a friend and the shrimp flew right off of her plate,” said Kent.

Quoin said that she hears about haunted houses and other sites mainly through word of mouth.

“People hear about me and call,” she said.

While some of her encounters have been scary, she said the most frightening occurred in her own home.

“One night, I woke up around 4:00 AM on a downstairs sofa, and was wide awake when I went upstairs to bed, she recalled. ”

Once in bed, Kent said she heard something rustling next to her. “But there was no one else in the room,” she said.

“Then something pressed on my chest; I couldn’t move or breathe and that’s a bad sign.”

She said she felt as though “something” wanted to oppress her.

“Giving off fear at that point only would have fed it, so I let out a laugh and it was gone,” she said.

Kent thinks that some items she innocently took into her house, including a butter knife, might have held some negative energy, leading to that encounter.

But, Kent adds, she also feels there is a positive force in her house.

“I came home later one night than I had planned and found all the lights were on in the house, from basement to the top floor,” she said, noting she had not left them on.

“When I stepped inside, I smelled dill; my grandmother always cooked with dill.”

Kent said she feels the positive force is there to protect her, and keep her safe from any harm.

Kent, who seems to have had more than her fair share of paranormal encounters, said Halloween, which is just around the corner, can “stir things up” because of the number of people who tend to congregate in places like cemeteries and haunted houses.

But, she said, more “diabolical events” are apt to occur on the holidays of Easter and Christmas.

“That’s because of their connection with religion, with God, whom demons oppose,” she explained.

Kent also offers some advise to the would-be ghost hunters.

“Don’t enter into other worldly realms lightly or foolishly,” she said.

She said that, as in the earthly realm, there are good and evil in the spirit world.

And she acknowledges that skeptics might not totally believe the photos in her calendar are really spirits or ghostly events.

But “seeing is believing,” she said.