Warning: "continue" targeting switch is equivalent to "break". Did you mean to use "continue 2"? in /homepages/6/d602103611/htdocs/clickandbuilds/CosmicSociety/wp-content/plugins/siteorigin-panels/inc/styles-admin.php on line 390
 Meet Donna Kent - Cosmic Society of Paranormal Investigation
Skip to content 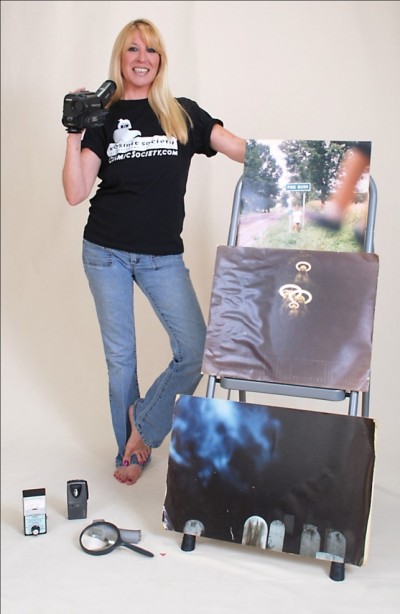 Donna Kent is the founder of The Cosmic Society of Paranormal Investigation and CosmicSociety.com, one of the internet’s largest, free, spirit energy photo websites. She has appeared on countless radio, news and television shows including SyFy’s Sightings and Ghost Hunters, the Maury Povich Show, the ABC SPECIAL – “World’s Scariest Ghosts – Caught on Tape,” and The Travel Channel’s “Most Terrifying Places,” to mention just a few! Donna has consulted for several paranormal programs, including the former SyFy show “The Haunted Collector.’ Miss Kent recently appeared with Gordon Ramsey at his request at a haunted location from her 2nd book for his show ‘Hotel Hell’ and Miss Kent also makes a few appearances in the yet to be released “Micah Rood – The Legend Behind the Curse” as an expert on curses.

Her first book, Ghost Stories and Legends of Eastern Connecticut – Lore, Mysteries and Secrets Revealed, was the publisher’s (History Press) #1 seller in their Haunted America division for 2007 and was featured in the November 1, 2007 NY Times, Metro Section, 800 word article featuring Donna at the haunted Lighthouse Inn in New London, CT. Her newest book, Ghost Stories and Legends of Southeastern Connecticut has garnered Kent a video with the Wall Street Journal and many television and press media opportunities.

Kent has authored and published the Investigating a Haunted Location Handbook and has written for magazines including Llewellyn’s New World, Fate Magazine, and The Door Opener. She is the editor and publisher of Cosmic Connections newsletter and the 1997, 1998 and Millennium Ghost Calendars. Donna is the director of Haunted Connecticut Tours in the USA, voted Connecticut’s #1 tour. In addition to its main goal of “Helping the Haunted” Cosmic Society offers worldwide membership, classes, workshops, seminars and presentations on spirit photography, paranormal investigation.

Here’s what others had to say:

“Most people might shy away from entering a haunted house or venturing in a dark graveyard at night, but Donna Kent is definitely not one of them…”
– Connecticut Post

“We’ve all gone through this, you know, you hear a noise in the middle of the night, is it the howling of the wind or settling of the house? Could it be a ghost? Donna Kent may just have the answer”
-Maury Povitch

“She’s like a beacon. A lighthouse. Spirits are naturally attracted to her”
– James Van Praagh – ABC Special “World’s Scariest Ghosts – Caught on Tape!”